Mama Lambert (1952) has been the head of counseling of Solace Ministries in Rwanda since 2002, where she supports genocide survivors in coming to terms with the genocide. She is herself a genocide survivor. She is an inspirator for many Rwandans as well as people from all over the world. Mama Lambert has spoken all around the world on topics such as ‘forgiveness’, ‘justice’, ‘trauma’, ‘healing’, ‘conflict-related sexual violence’ and ’empowerment’.

Mama Lambert is the recipient of the ‘Voice Achievers Award African Community Service 2019’ and was a finalist of the United States Institute of Peace ‘Women Building Peace Award 2020’. 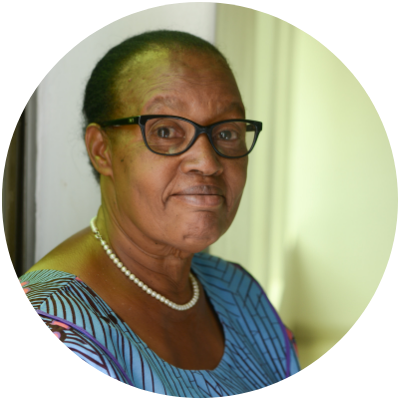 Mama Lambert’s birth name is Béata Mukarubuga. She worked as a primary school teacher before the genocide against the Tutsi of 1994 in Rwanda. Mama Lambert survived the genocide, but lost her husband and five of her eight children, her parents, sister and brother and many other family members. Since the genocide, she calls herself Mama Lambert, ‘the mother of Lambert’; my youngest which she carried on her back during the genocide and who survived with her. She lives in Kigali and since 2002 she holds a permanent position with Solace Ministries, a survivor run organization/NGO founded in 1995 on behalf of widows, orphans and people with HIV or AIDS who survived the genocide. She works as head of the counselling department. Solace Ministries’ goal is to empower genocide survivors in a holistic way; physically, psychologically, socio-economically, and spiritually.

In 2015, Mama Lambert successfully completed a degree in theology at the Rwanda Institute of Evangelical Theology (RIET University). Her thesis dealt with an evaluation of the impact of the work of Solace Ministries on the women and orphans in rural Runda; to what extent have they been empowered psychologically and socio-economically? Mama Lambert visited several countries (including Germany, the Netherlands, Belgium, France, Kenya and USA) and has spoken of her experiences and work in support of empowering genocide survivors in rural Rwanda, mostly poor women, many who survived genocidal sexual violence. She has also spoken about how she has been able to forgive the perpetrators and how this has helped her (and others) on her (their) journey to reconciliation, with the perpetrators, the community, the society, and the international community. Since 2018, Mama Lambert is a member of the SEMA-network of the Dr. Denis Mukwege Foundation, a global network with survivors of conflict-related sexual violence from all over the world.

In 2013, Mama Lambert visited the Netherlands for several weeks to tell her full story and write a book about her life and work. Her book is titled “For those who do not believe in miracles: The resilience of a Rwandan woman who survived the genocide (Wolf Legal Publishers, 2015)” and has been updated to cover the most recent years (Wolf Legal Publishers, 2019, 4th edition). In addition, her work is featured in books, such as, “The Men Who Killed Me: Rwandan Survivors of Sexual Violence (2009)”, “Solace: The Story of Solace Ministries – a Living Testimony of Healing, Hope and Dignity Restored in the Aftermath of the 1994 Genocide against Tutsi in Rwanda (2015)”, “And I Live On: The Resilience of Genocide Survivors of Sexual Violence (2019)” and “Rwandan Daughters (2019).”

Mama Lambert is the recipient of the ‘Voice Achievers Award African Community Service 2019’ and was a finalist of the United States Institute of Peace ‘Women Building Peace Award 2020’.

– Mama Lambert (with Hans Dekkers), For Those Who Do Not Believe in Miracles: The Resilience of a Rwandan Woman Who Survived the Genocide (Wolf Legal Publishers, 2015 (1st edition); 2019 (4th edition)), 251 pp: Paperback and ePub

– Mama Lambert and Anne-Marie de Brouwer, “And I Live On: The Resilience of Rwandan Genocide Survivors of Sexual Violence – Rehabilitation of Survivors: The work of Mukomeze and Solace Ministries, in: Felix Ndahinda et al., 25 Years after the Genocide against the Tutsi in Rwanda, 2020, forthcoming (based on presentation in April 2019 at the Peace Palace, The Hague).

In addition, Mama Lambert’s work and the impact thereof, has been featured in several publications, including: “And I live on”, “The men who killed me”, “Solace: The Story of Solace Ministries”, and “Rwandan daughters”. The testimonials in these books are all beneficiaries of Solace Ministries and they all received counselling from Mama Lambert. In the books the survivors testify to the impact of the counselling and socio-economic and other support on their lives over the past decades.

Other publications which reference to Mama Lambert’s work and life story:

– Beweging van Barmhartigheid, Voor Wie Niet in Wonderen Gelooft (“For Those Who Do Not Believe in Miracles”), by Madelinde Krantz (20 November 2016) (Dutch online magazine, book review).

– Nieuw Wij, The Resilience of a Rwandan Woman Who Survived the Genocide, by Diana Vernooij (13 December 2015) (Dutch magazine).

– Newsredactie, Tilburg Students Get a Lesson in Forgiveness, by Wilke Stuij (5 May 2015) (Dutch online newspaper).