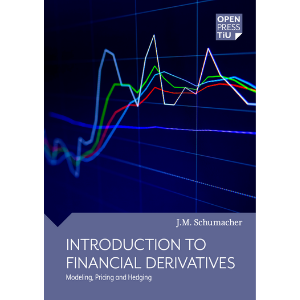 Johannes M. (Hans) Schumacher studied Mathematics at the Vrije Universiteit in Amsterdam and obtained the PhD degree from the same institution in 1981. He spent… Read more

“Financial derivatives are widely used as instruments to modify exposures to various types of financial risk. Examples include call options on a stock index, interest rate derivatives such as swaptions, and credit derivatives. The theory of financial derivatives, as it has been developed in recent decades, is based on a mix of economic ideas and concepts from mathematics. A key notion is the principle of absence of arbitrage, which calls for models for financial markets to be constructed in such a way that they do not allow the possibility of a riskless profit. From a mathematical perspective, the main resource is the theory of stochastic processes.

The material in this Open Press textbook originates from notes for a course that the author has taught at Tilburg University for more than ten years, as part of the MSc program in Quantitative Finance and Actuarial Science. The text aims to provide students with an introduction to continuous-time models that are used to analyze derivative contracts in finance and insurance. Users are expected to have a solid background in standard calculus, linear algebra, and probability; prior experience with stochastic calculus, however, is not a prerequisite. The main ingredients in the text are:

The text comes with a fairly large number of exercises, including some that may feel more like projects. For (somewhat randomly) selected exercises, hints or complete solutions are provided in an appendix.

In the main text as well as in the solutions to exercises, code examples are given to support the exposition. These examples are written as executable Matlab files. An appendix is provided in which the meaning of all Matlab commands that are used is explained. This is meant to facilitate translation to other languages which the reader may prefer, such as R, Julia, or Scilab.

The mathematical theory of derivatives is sometimes referred to as “rational option pricing.” Indeed the theory could be compared to rational mechanics, the scientific discipline that speaks of point masses, weightless inextensible cords, and frictionless pulleys. A certain amount of idealization is involved; a large amount, perhaps. Models are confined to a certain domain of validity, and even within this domain, they are not fully accurate. Nevertheless, the theory is meaningful, when applied with an understanding of its limitations. In the sometimes dazzling and overheated environment of finance, mathematical models provide much-needed guidance. The present text is intended to help students enjoy the cool world that has been created by the arbitrage theory of financial markets.”

We offer a wide range of high quality knowledge sharing and activities.

We have a commitment to ensure that the offered specific knowledge is easily accessible, accurate and deepened by you as authority. Our Services Team is trained to support you along the proces of publishing.

We pride ourselves in delivering the best education possible to our students.

We have a commitment to ensure that our students receive the best care and support so that they feel happy and safe. Find guidance elements in supporting you to thrive and achieve academically.